Studies in Europe have demonstrated that streetlighting has a significant effect on the mood of human beings, animal life and the environment. It affects navigation of birds and insects, mating behavior in animals and flowering in plants. Millions of insects are attracted to street lights at night (par

ticularly during summer months) and perish. These insects can be an urban nuisance besides adding to the cost of cleaning up lamp fixtures and the street sidewalk to remove dead insects. But not all street lights attract insects or affect animal life the same. The impact of LED lights on animals is much smaller compared to other lights.

IESNA classifies luminaires as »non cutoff«, »semi cutoff«, »cutoff« and »full cutoff«, depending on how much of light is dispersed above the horizontal line of luminaire. 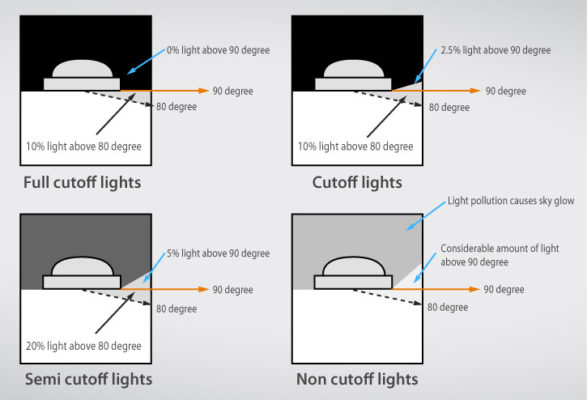 The non-cutoff fixtures usually include the globe-shaped lamps that are mounted on top of lampposts. These lamps distribute their light in all directions. A major problem is created by the light pollution and glare, as they shoot their light upwards into trees and towards the sky rather than down towards the ground. Non-cutoff fixtures are rarely found on roadways because they tend to blind the driver.

These optics give more light control than semicutoffs. Less than 2.5% of the light can leave the fixture above 90 degrees. Cutoff fixtures have gained popularity in recent years, as they are available from manufacturers like GE and American Electric. The cutoff lights have a wider spread of light than full-cutoffs, and they generate less glare than semicutoffs. The cutoff lenses consist of a shallow curved glass (also called a sag lens) that is visible just below the lighting area on the fixture.

These lights do not allow any of the light to escape the fixture above 90 degrees. Full-cutoffs distribute their light in a defined pattern, potentially providing more light on the ground at lower power consumption. Full cutoff means luminaires which are totally environmentally friendly (causing no light pollution).

An understanding of the concept of Scotopic lumens can deeply influence cost and performance equations of lighting solutions.

Scotopic lumen output depends not only on the absolute light output from a lamp but also on the wavelengths comprising light from a light source. Human eye has two kinds of light sensing cells – Rods and Cones, which both have different spectral sensitivities. Line of sight vision is due largely to cone cells. Peripheral vision on the other hand is affected by rod cells.

Although all three modes of vision help us see under different conditions, nighttime vision is generally dominated by scotopic mechanisms (for very dark conditions with no ambient light) or mesopic mechanisms (for semi-dark conditions, such as a full moon and heavily lit commercial roadways). Unfortunately, virtually all photometric tests used to determine light output from street lighting sources are based on photopic vision, which is not representative of the human response to light under low light (nighttime) conditions. Photopic measurements favor “warmer” light, such as the orange light produced by common HID street light sources, including high pressure sodium lamps. Scotopic and mesopic measurements are more representative of a broader spectrum of light, including the “cooler” light generated by most LEDs used in street lighting applications.Because of these differences, many leading scientists and lighting experts believe that photopic measurements should be used for daytime and indoor lighting measurements, and scotopic or mesopic measurements should be used to evaluate nighttime lighting measurements.

Scientists at the Lawrence Berkley Laboratory (LBL) developed a factor called P/S ratio. This ratio helps convert traditional lumens into actual lumens perceived by the eye under mesopic light conditions and gives a more accurate estimate of the amount of light.

Factoring in the scotopic efficiency of lamps demonstrates that LED lights outperform most other technologies by 100 % or more.

The road on the left is illuminated with LED lights and that on the right with High pressure Sodium (HPS) lamps. LED lights produce less lumens as compared to the HPS lamp but visibility is better under LED lights. This is because of better color rendering index, light uniformity and scotopic efficiency.